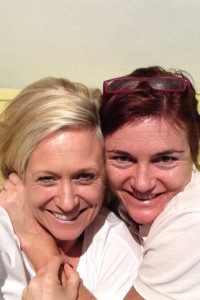 I went to donate blood in the little village where we lived and on this particular day Round Table were doing a “sign up to be a bone marrow donor” drive and I immediately signed up.

It was about 10 years later that I received a phone call to say I was a possible match for a patient needing a bone marrow stem cell transplant.  I remember getting goose bumps over my body!  I was so excited I couldn’t believe that after all these years I’d finally received a call from the SA Bone Marrow Registry.  I was asked to go to a clinic to give blood samples to start the “investigation”. The clinic staff were so professional and always had my best interests at heart and I must say, the blood tests were not painful at all. The adrenalin pumped through my body and I was prepared to do whatever they asked.  I secretly begged God to make me that perfect match. Each week I received a phone call telling me that I was still a possible match.  Each time meant I was getting closer and I told everyone what I was up to!

The process took a few months as it is an incredibly exact and expensive process to find a match. It eventually got to a point where I was a perfect match, God is so faithful.  I had to go for a final medical; all the costs were covered by the South African Bone Marrow Registry. I had X-rays and a medical examination. The doctor explained the procedure to me and it sounded organised and simple.

I had a choice as to where I wanted to donate the bone marrow stem cells and I chose Constantiaberg Hospital in Cape Town (because I love Cape Town). I was asked to take someone with me, so I took my mom.

Our tickets were booked and before we knew it we were off to Cape Town!  We were met at the airport by a courier from a fancy B&B that they had booked us into (all expenses paid). He took us to our B& B and as an added bonus; a little hired car was waiting for us there.

The most wonderful part of this process was how well organized it was. Never did we have to wonder what was happening next or what we had to do, it seemed that all the people involved had been so well rehearsed.

We arrived about 4 days before the procedure because I had to go to the hospital every morning to have a growth factor (G-CSF) injection, which were also painless.  The growth factor injections first increase production of stem cells in the bone marrow and secondly, release these stem cells into the bloodstream – clever doctors!  Anyway, each morning I arrived at the hospital to be greeted as if I were an angel and have my bloods checked just to see that the bone marrow stem cell count had increased and then have my daily injection.

It took a few days and finally I was admitted to the ward. It was difficult for me to see what Cancer patients go through, especially those who were so young. I spent as much time as possible visiting the children.

I couldn’t wait for the morning so I could get started with the harvest process, which is actually very similar to donating platelets.  Blood is drawn from one arm through a needle and filtered through a cell separator machine, bone marrow stem cells are collected from your blood into a bag.  The rest of your blood is returned via a needle in your other arm. This process usually takes +/- 4-6 hours and might need to be done on two consecutive days.  However in my case, after being checked by the doctor a decision was made to insert the needle and tube into my femoral vein and the others were removed from my arms.   I could eat, read and use my arms as I needed. I slept well after visiting my little friends who weren’t as happy as I was and it did remind of the purpose behind what I was doing.

My job was done!  When I reached my room, there was a lady standing at my door holding a small cooler box and she said “I’ve come to thank you for saving my patients life, in this little box is your life saving bone marrow stem cells.” Before I could say a word she waved saying “I’ve got a plane to catch – goodbye”.

It has been 5 years since that awesome day. I get a Christmas card every December and a phone call on every anniversary and the good news that “my friend” is alive well and happy! I wish I could do it again but you can only be a donor once in your life.  I pray that my story inspires someone else to be brave enough to save a life, it is truly life changing.