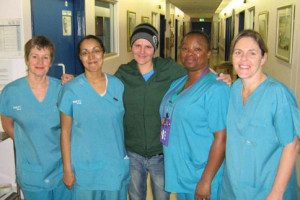 Carey’s Courage: In 2007, young, energetic, Carey Boucher was in love and life was good. After developing strange bruises all over her face and body she went to see the dermatologist, who performed various biopsies. She was then referred to an oncologist, who eventually broke the devastating news to her. Carey had Acute Myeloid Leukaemia.

Carey’s world spun out of control as her family and friends struggled to come to terms with the fact that this was happening to someone they loved. She was almost immediately hospitalised for her first chemo session, just before Christmas. There was much relief when she was allowed to spend Christmas at home, but just two days later she was admitted again for her second round of chemo. Her second round of chemo brought with it many struggles with ongoing infections wreaking havoc on her body. Carey fought back from a coma, despite doctor’s fears. It was during this time that the sense of urgency in finding Carey a bone marrow donor became crucial. Thus began a campaign to raise funds to financially enable a transplant for Carey once a donor was found. They also set about getting more South Africans to register as bone marrow donors.

While Carey was undergoing treatment her fiancé, Johann decided to transform her hospital room into a mini Paris, Eiffel tower and all, in order to declare his love for Carey and ask her to be his wife.

The chances of finding a bone marrow stem cell donor are 1:100 000 and currently the South African Bone Marrow Registry has only 53 000 people registered. Each tissue typing test costs approximately R1000 which is where The Sunflower Fund comes in. They raise funds to cover the cost of tissue typing potential donors, thereby increasing the SABMR and subsequently the chances of patients in finding a suitable match.

People from around the world started coming forward to donate funds to the R300 000 target Carey and her family needed to perform a worldwide donor search and for the potential transplant to follow. All the while Carey remained determined to beat the cancer. Her mom … said during this time, “Carey’s desire is to resume her life, but we all know after such life changing challenges, a lot would have changed. In her I still see the same Carey but with an extraordinary will to fight and kick this phase out the door. I think many of us can learn from her. I am not sure that many people who learned about Carey, have been unable to walk away without a warmth in their heart and a different outlook on life and the things we take so for granted. Thank you little Princess for brightening the world with more than just your smile.”

In April 2008 as they awaited the results of the tests on two potential German donors, Carey was finally allowed home. Going home after receiving chemotherapy and having your immune system destroyed can be a scary prospect but all went well for Carey. Her doctors were happy with her progress but the anxiety of waiting on news of a donor took its toll on the family.

On 3 June 2008, Carey and her family received the news they had long been waiting for, she had a bone marrow stem cell donor from Germany. Her transplant was took place on 2 July but it was preceded by an aggressive round of chemo and 3 cycles of full body radiation which left her immune system at 0. It was a crucial time when any slight infection could jeopardise her progress towards the transplant. Stocked up with Jelly Tots and juice, Carey bravely took on the challenge.

On 28 June a courier began the journey to Germany to collect the life-giving bone marrow stem cells from the donor. On the day of her transplant candles were lit in the UK and Cape Town as a sign of celebration for the potentially life-saving transplant that was about to go ahead. The procedure itself took less then a few hours and yet Carey will hopefully feel the effects for many years to come.

On 17 July, Carey stepped through the doors of the hospital after a nostalgic goodbye to all the staff and doctors who had been beside her on her brave journey. “I’m born again…spiritually, mentally and physically. I am so excited to get on with my life, plan our wedding and get back to my wonderful job”, said Carey.

Carey has had a few minor set backs since then as her body fights to restore its immune system but she remains positive and only time will tell what the future holds for this brave young woman. Support others like Carey, register as a bone marrow stem cell donor today and become and Ambassador of Hope for The Sunflower Fund.