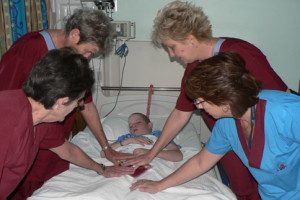 Joshua was almost 11 when he was diagnosed with Burkitt’s Lymphoma. At first they thought he just had a blocked stomach due to an unhealthy lifestyle, even though he was very active and ate well. When after a stomach flush the blockage was still there, it was thought to be the large intestine overlapping the small intestine. They operated to fix it and the planned minor op turned into a major one when a cricket ball sized tumor was found and had to be removed, and a 10 cm portion of his colon cut out.

The only symptoms that Joshua presented were nausea and a sore stomach on the morning he was taken to hospital. That was 20 July 2008, the day after he watched Manchester United play Kaiser Chiefs at Newlands. Josh and our lives changed drastically from that point on.

It has been tough but one thing it did was bring the family closer together, which meant we spent a lot more time together. Suddenly work was not so important. Friends and strangers alike supported the trust fund, without which we could never have afforded Joshua’s treatment.

Josh had 10 sessions of 5 day chemo treatments between August 2008 and April 2009. At the beginning of May Josh was announced to be in remission, and the search for a bone marrow donor started. Joshua was very lucky to find two perfect match donors in Germany, with the same blood group as well. The transplant took place on 1 July 2009 and Josh is recovering well. Joshua’s stay in hospital for the transplant was 29 days and was about average length for this procedure. He has been out of school for more than a year and will hopefully go back in October this year.

The Sunflower Fund was supportive of Josh throughout his journey and tt is amazing that so many non-profit organisations exist that help people in our situation including The Sunflower Fund, CHOC, CarePages and Reach For A Dream.

Josh has remained very positive and strong despite his young years. He seems to have thought about his predicament in depth and was asking a lot of questions about God and heaven at first, not that he thought he was going there but he said he just wanted to know. He has often asked what his mom and my life has been like since his diagnosis and after explaining how it’s changed for me I have asked him what it has been like for him. His attitude is that he doesn’t mind as this is normal for him. He says if he thought otherwise he would not be able to handle it.

It must be tough for him having seen so many other cancer patients not make it.  His response every time is that he really feels for the families, not the patient. My little hero! Josh has managed to be a bright light, inspiring those around him and others with cancer. We are all very grateful and appreciative of Joshua’s strength and the fantastic effort of Professor Jacobs and all the staff at Constantiaberg Medi Clinic. Josh has touched their hearts and made a huge impression on everyone around him.