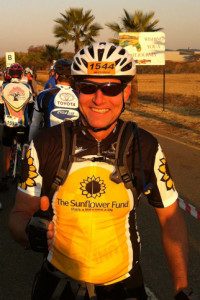 I am a happily married man to Lynne with 3 wonderful kids, Kimberly (21), Sarah (17) and Jayson (14). I have been working as a consulting engineer for BBE in the field of mine ventilation and cooling since 1995. I was first diagnosed with AML leukemia in Aug 2006 after noticing that a bruise on my arm wouldn’t heal.

My wife Lynne eventually convinced me to see a GP. I think this was my first visit to a doctor in about 5 years as I generally don’t get  sick. The blood test and a bone marrow aspirate quickly confirmed that I had Leukemia. The doctor informed me that there was many treatments and that there was a survival rate of 20%.

I remained upbeat and was determined to join all the other Survivors. At that stage I had no idea just how hard or how long the treatment was going to last and that it would totally change my outlook on life (for the better).

The next day (Friday) I was checked into an isolation ward at the Donald Gordon Medical Centre which would become my “second home” for a long time.

On the Monday morning I was taken into an operating theatre and had a port inserted so that it would be easier to receive the chemo which is very aggressive and can be destructive to the veins. My platelet count was so low that they needed to give me a blood transfusion before starting the operation. The induction treatment was a continuous 7 day chemo followed by 3 weeks of recovery in isolation ward. This was the first time that I had an operation or had been in hospital for that matter.
Fortunately I responded well to the treatment and was back in remission (abnormal blast cells less than 5%). This induction treatment was then repeated.

Due to my prognosis it was felt that the best solution was to look for a bone marrow donor. Fortunately my only sibling Gary turned out to be a perfect match, so we started making plans for a stem cell transplant in the beginning of 2007.

I had decided that I wanted to receive the stem cells fresh to avoid the process of freezing the stem cells. Prof Ruff, my oncologist, planned it perfectly and I was able to receive the life saving stem cells direct from my brother. Lynne had to transport the little bag from the donation centre to my hospital so she literally had my life in her hands.

The infusion was uneventful and then it was a waiting game, until the new bone marrow was able to produce new blood. So I changed blood type from A-neg to O-neg in the process. By the middle of the year I had recovered to the point that I did a hike with Jayson from the town of Greyton to Mc Gregor in the July snow. It was great to be able to exercise and I was beginning to feel back to normal. Even my taste buds had started to return so I quickly put on all the weight that I had lost. Due to the anti-rejection drugs I still had a weak immune system and needed to keep a low profile and avoid the public and especially shopping centre’s and flying.

I was convinced that I was cured, but then in March 2008 a routine blood test showed that I had relapsed. This was a terrible shock to me and the family. The oncologist was also a bit stunned that I relapsed after the stem cell transplant, which is considered a cure. The first thing that the oncologist tried was a white cell infusion of the killer T-cells direct from my brother to me. The idea is that the killer T-cells would attack the Leukemia cells. Normally this results in a severe reaction but there was not even the slightest reaction; again a most unusual result unless the siblings are identical twins, which clearly we were not.

It was the Thursday morning when I received the news that it had not worked and was the start of the long Easter weekend. The only remaining option was high dose chemo which is about 20 times the concentration of the induction treatment and this would start on Tuesday. I knew the risks were high and that this time it would be a real fight for survival.

I quickly decided to check out of the hospital and fly to Egypt with the family to visit the Pyramids which had been my life long dream. It was a risky adventure but I needed something to take my mind off the task ahead and just enjoy the moment with my family, especially if something went wrong with the treatment. It turned out to be an amazing adventure and seemed to last a lifetime. Everything went better than perfect…from a hotel employee meeting us as we disembarked and then escorting us through passport control, baggage collection and then straight to a waiting black Mercedes. We felt like royalty! The rest of the trip is a story on its own…which my wife actually submitted to a short story contest.

The rest of 2008 was spend between chemo sessions, blood transfusions and isolation wards. The treatment was very severe and left my body weak and anemic. I had lost most of my body muscle from being bed-ridden for 8 months. Also my veins had started to harden from the chemo and the daily blood tests became more and more painful. In all I had about 50 blood transfusions and therefore I am truly thankful for all the donors that kept me alive during this period. Sometimes I couldn’t eat for several weeks and lost about 28 kg in weight. Again it took a long time for my taste buds to return but by the end of 2009 I was getting back to normal, except for a 3 month bout of shingles at the beginning of the year. I started playing tennis and exercising but I would get out of breath very easily.

By the middle of 2010, around the exciting time of the Soccer World Cup, I had the idea to climb Mt Kilimanjaro in September that year. I started going to the gym daily and was assisted by a personnel trainer at Planet Fitness. I managed to strengthen the core muscles and lost 12 kg of excess weight. It was a spiritual experience climbing the highest mountain in Africa and was an emotional experience reaching the summit with my other 3 climbing companions and I don’t think there was many dry eyes at the top. This experience opened a new world and took away the feeling of limitations. Now I felt that I could do anything so I decided to embark on climbing the 7 summits! It had to be a challenged that sounded impossible but now it is looking very real as my fitness has improved in leaps and bounds. In November last year I took up cycling for endurance training and was soon riding 100 km races every two weeks. The highlight was the Argus tour in Cape Town In March 2011 with the wonderful weather and about 30,000 other cyclists. I have signed up to climb some of the 7 summits climbs with Sean Disney as the guide (he has completed the 7 summits twice!). I was due to climb Mt Elbrus in Russia in July 2011 but this has been delayed until next year since the Russian border was closed a few weeks ago.  Instead I am using the opportunity to climb Mt Kilimanjaro with my son which will be a great bonding experience. At the summit we will be 2-3 km above the clouds and will even see the curvature of the earth. It is a breathtaking experience!

Then in January 2012 I will head for South America to climb Aconcagua, which is the highest peak outside of the Himalayas and will take 3 weeks to reach the summit at nearly 7000 m. This will be a nice gift for my 47’th birthday on the 29’th January. So I’m sure there will be many more tales to tell on these adventures. I hope it will be inspiring for other cancer survivors.  My message is never to lose your dream!