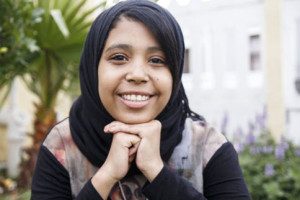 Doctors and healthcare specialists are on a search for a stem cell donor, both locally and abroad, for Zyaan Makda (13) for whom a stem cell transplant is the only cure.

It has been more than seven years since Zyaan’s world, and that of her family, was turned upside down. The family was on holiday in Johannesburg when Zyaan started experiencing earache. A visit to one doctor led to more doctor appointments and blood tests finally revealed that the young girl had heterozygote haemoglobinopathy – an incurable blood disorder.

The only cure is a stem cell transplant and Zyaan has been waiting for a donor for more than three years. In the meantime, she has to rely on blood transfusions and has had 134 of them since 2004. The veins in her hands have collapsed and she had a port put in her chest in 2014. She has had her gallbladder and gallstones removed and also has under-active thyroid disease. She needs blood transfusions every two weeks.

Yet Zyaan remains positive and upbeat, always ready with a smile. She seems like any other pretty, normal teenager of her age. But unlike most teenagers, she is frequently absent from school for medical reasons and cannot take part in sports. Her illness has given her a maturity and wisdom beyond her years. “In a way, it has helped me become the person that I am today,” she says.

Her mother, Fameda Govender, says, “Since we started our search, we have not been able to find a South African stem cell donor and her siblings are not matches for her either. I think honestly, that we have stopped waiting for a donor and have just started living again.”