Surviving the loss of a child: A fathers story 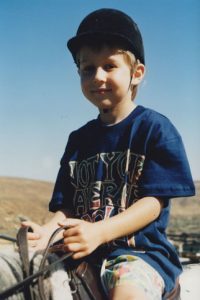 Losing someone is never easy. Losing a child – at such a young age – has to be the most painful and traumatic experience any parent can go through. We chatted to Paul Robinson, who lost his son Craig to leukaemia. We can’t imagine the anger, pain and complete devastation they must have felt as a family. All we can do is listen to their story in their own words…

Our son Craig was born on 25 January 1990. We were so excited about our new little family. We had dreams for him and his future. He was a bubbly, happy, loving child. We called him our “sonshine”

Craig was only two years old when he was diagnosed with acute lymphoblastic leukaemia (ALL). That day our happy, carefree world, as we knew it, was changed forever. Our second son, Kevin, was three months old when Craig was diagnosed.

Naturally, we focused everything on looking after our son and trusting his doctors completely with the treatment he had to receive. The chemotherapy was grueling on his little body and it was so difficult for him to understand why he needed to be in hospital and to regularly go in for chemo.

At the time we were living in Oranjemund, Namibia, and Craig’s treatment would be at the Red Cross Children’s Hospital in Cape Town. So we made the only decision that seemed right at the time. Michelle, my wife, would move to my parents’ home in Somerset West to be closer for treatment. I would travel a return journey of 1620 kilometer, every weekend for ten months to be with my family.

This was emotionally difficult for us. Michelle and I relied on evening landline calls (no cell phones in South Africa yet in 1992). Sharing our concerns and heartache and missing each other for physical support was really hard. I battled with not being with Craig during treatment and relying on telephone chats to find out how he was doing during the week. Weekends were short, but packed with quality time and fun time spent together as a family. We fully believed that Craig would be cured.

We moved to Kleinzee in January 1994 on the West Coast, which was at least only 600 km from Cape Town. Craig’s chemo schedule was a two week cycles (five days hospital then nine days tablets/injections).

Michelle would drive to Cape Town for the five days, then be home for nine days (our local doctor assisted with the injections). At least we were living as a family again. We needed this! Being apart during this trying time was a strain.

Craig was doing well. The two years and two months’ chemo program was finally finished in October 1994!! We celebrated with joy and looked forward to getting back to normal life.

At Craig’s first six-week checkup, the leukaemia had returned. We were shocked and devastated. Terrified actually.

Our only hope now was a stem cell transplant. Kevin (who was now 2 years old) was unfortunately not a match. The Sunflower Fund wasn’t established yet. So the plan was two more years of chemotherapy.

Craig was back into remission quickly.

We tried to live as “normal” a life as possible. Michelle and I were positive and believed that Craig was going to be cured (even though now there was only a 40% chance of success).

We had amazing times together. We’re a very close family unit and enjoy doing fun things together. We lived at the coast, so most afternoons after work, Michelle, the boys, and I would go to the beach. Picnic suppers, picking up sea shells, building sand castles and 4×4 trips along the coast were our favourite pastimes.

I can’t even begin to explain how that feels. Words are insufficient. Heartbreak, shock, anger, helplessness, disbelief. We begged and pleaded and cried that they continued treatment. We finally had to realise and accept that the doctors knew what was best for Craig. The treatment was making him feel so awful, but might have given only a few extra weeks. Craig’s comfort and well-being had to come first. So he was given medication to make him feel comfortable. The hardest thing as a parent is to feel so helpless. And to have to trust the doctor’s decisions so completely. Ultimately, our faith in God kept us solid.

I was given leave from work and was at home full-time with my family. We filled every hour being together. We did whatever Craig was up to doing. We played finger board at 2am and made mashed potatoes and peas (his craving at the time) at 11pm. He went for a flip in a plane and went horse riding a few times. Both dreams of his. He slept a lot in the day too. His hours were different and we fitted in.

Michelle and I would sit with Craig and watch him sleeping. We would stroke his hair and try to soak up everything about him. Quietly saying goodbye in our hearts. But not actually believing the reality that we were facing. It was too much to comprehend.

Sadly, Craig passed away four weeks later on the 19th of January 1996 (he would have turned 6 years old on the 25th of January 1996). Our hearts were broken. We didn’t know how to even begin living again. We were so lost. Kevin was three and a half at the time and was our saving grace. We had to keep going and be great parents to him. He really battled to understand that Craig wasn’t coming back. We stuck together and somehow survived one day at a time. Michelle and I grieved very differently. I withdrew into myself. Michelle cried a lot and wanted my comfort. So, the first few months were very difficult. I learned to open up and we supported and loved each other. We hung onto our little family.

We felt anger and despair, overwhelmed with sadness and kept on wondering if we had done enough to help Craig. Kevin coped by watching our home-movies over and over again. He felt like he was with Craig then. But hearing Craig’s voice made our hearts leap, and we wanted to run into the lounge and hug him. It was so hard. In February 1997, we were blessed with a daughter, Kayla. Kevin adored her and was thrilled to have a sister. Kayla has grown up feeling sad that she never knew Craig. But she loves him too. In her own words, “My dearest brother, you mean the world to me and my family. I can’t wait to meet you one day. I know that you are in good hands in heaven. I dedicate all my horse riding achievements to you as I know you had a passion for horses.” Kayla always says she has two brothers, one on earth and other in heaven. Kevin, to this day still wishes that he could still see, talk and be with his brother.

We miss Craig every day. He is our son. That will never change. He has taught us that life is a gift and that we should celebrate it with every waking moment. We honor him by being strong, by remaining positive, by living in hope. There are still many times that we cry and wish that things had turned out differently.

Together with Kevin and Kayla, we celebrate Craig’s life by doing something special each year on his birthday. Our faith in God and our loving family have carried us then, and will continue to carry us now, as we live life with hope as one day we will all be together again. Special days like birthdays are still the hardest. When Craig should have gone to grade one and high school we cried. On his 21st birthday we celebrated with a dinner, but it was so sad too. He would have been 27 now. We are happy most of the time. We did learn to laugh and have fun again. We have survived. We are stronger as we appreciate the value of life. We focus on the things that really matter. We value each day that we are blessed with. We got through it, but we will never get over it. We still hurt and need to support each other.

It is truly a blessing to have been Craig’s parents. We were privileged to have spent 6 years filled with happiness and laughter. He will always fill a big part in our hearts.