The formation of The Sunflower Fund in 1999 was inspired by the heroic struggle against leukaemia of two brave young men, Darren Serebro (1997) and Chris Corlett (2000). It was started by a group of concerned parents whose children had contracted leukaemia, and sadly, in some cases had lost their battle against it.

These young men’s fortitude and willingness to share even the darkest moments of their short lives awakened a flood of public support, which resulted in the birth of the Friends of the South African Bone Marrow Registry Foundation.

The original ‘Sunflowers of Hope’ painting was completed by 17-year-old Chris Corlett while he was being treated for acute lymphoblastic leukaemia. This was founder patron Tina Botha’s main inspiration for the name change to The Sunflower Fund. Tina Botha’s commitment to growing the number of registered donors in South Africa meant that she turned her loss into something powerful and positive. She held the role of CEO of The Sunflower Fund for 13 years and made the transition to founder patron in 2013. Tina’s daughter, Tarryn Corlett, assumed the role of CEO until August 2015.

Alana James was appointed CEO of The Sunflower Fund in September 2015. She has a wealth of experience from a career spanning nearly two decades in the corporate and NGO sectors across South Africa and Africa.

Alana ran her own business for four years as a Strategy Consultant and is currently Non-Executive Director on the board of the Cape Chamber of Commerce, Chair of Northlink FET College Council amongst board roles and a business coach.

Alana’s primary aim is to continue to grow the strength of The Sunflower Fund brand and to develop the understanding of all South Africans regarding the organisation’s cause, through strategic partnerships locally and within the global Stem Cell (bone marrow) registry network.

Under her leadership The Sunflower Fund has become one of the founding members of the Stem Cell Registry Alliance (SCRA) a network of registries across the Caribbean, Africa and Europe committed to recruiting donors of African descent. 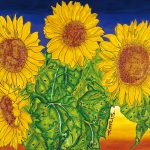 In January 2019, The Sunflower Fund, The Moore Foundation and the Nigerian Bone Marrow Registry formalised a partnership to extend donor recruitment and registry services into Ghana.

Continuing on a journey of growing their impact, The Sunflower Fund entered into a partnership with DKMS in February 2020. DKMS is an international non-profit organization dedicated to the fight against blood cancer and other blood disorders, founded in Germany by Dr. Peter Harf.

The DKMS story began with one family fighting to save someone they loved. When Mechtild Harf was told that the only treatment for her leukaemia was a bone marrow transplant, she had no matching family members. At the time, there were only 3,000 potential stem cell donors on the German registry to provide a transplant. Confronted by the knowledge that his wife faced difficult odds in finding a matching donor, her husband Peter decided to apply his prolific business skills to the question of how to give his wife and patients like her the best chance at survival. The answer seemed clear: more unrelated donors meant better chances for all patients in need.

Peter founded DKMS with his wife’s transplant physician, Gerhard Ehninger, on the 28th of May 1991 and in their first year of operations we managed to expand the registry from 3,000 donors to 68,000. Despite the Harf family’s best efforts, Mechtild ultimately did not survive. However, before she passed away she made Peter promise her that he would not stop fighting until every patient had a matching donor and a potential second chance at life. Since then Peter and his daughter Katharina Harf, the Vice Chairwoman of the DKMS Foundation Board, have kept that promise. Motivated by the fate of their wife and mother, by 1995 Katharina and Peter had helped build DKMS into the world’s largest stem cell donor register and ever since we have worked tirelessly to fulfill our mission – to provide as many blood cancer patients as possible with a second chance at life.

Today DKMS operates in seven countries. Together the two organisations will continue their work in Africa as The Sunflower Fund partnered by DKMS.